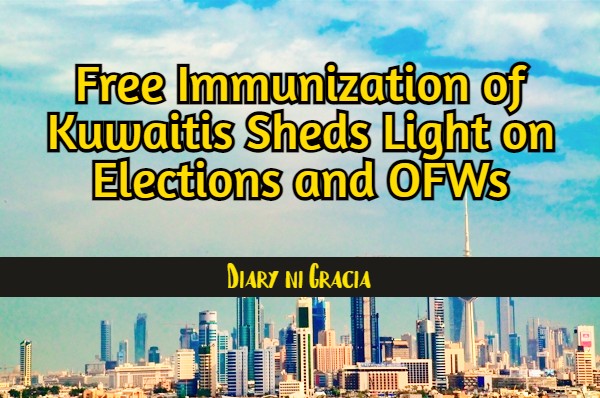 Kuwait Embassy holds free vaccination for Kuwaitis, and meanwhile, in the Philippines, Rodrigo Duterte signs advance payments for vaccines as hope for OFWs and citizens alike.

“To lose patience is to lose the battle.”

The Hope and the Cure

Kuwait secures vaccine 1.7 million vaccines from Moderna, 1 million from Pfizer, and 3 million Oxford-AstraZeneca vaccines. The vaccines are to be administered to chronically ill citizens, our brave frontliners, and the elderly for two shots every 21 days.

The Kuwait minister of Health Basel Al Sabah and his committee organizes and prepares an online site for easier access and registration of Kuwaitis in scheduling vaccine appointments. The arrival date will depend on Pfizer getting the Drug Administration (FDA) approval, as Kuwait expects the first batch of vaccine to arrive containing 150,000 shots.

Having a population of 4 million people, Kuwait would provide vaccines for around 2.8 million of two doses per person from 5.7 million doses of the vaccine. However, it is not recommended to be given to children under the age of 18. The drug will only be and would be only be ordered for those who are 19 and above.

Despite the plans to provide the vaccine, people are uncertain or against taking the vaccine due to unsafe or doubtful factors of the early administration of drugs, with their side-effects, fear, unfamiliarity with the stages of vaccine approval and documentation. This can be seen in the survey of Kuwait’s local newspaper, in which 10,000 citizens participated. 39% said they would take the vaccine, 15% said they are not sure, and 46% said they would refuse to accept the COVID-19 shot.

5, 2020, as the next National Assembly election. The prime minister, Sheikh Sabah Khaled Al-Hamad Al-Sabah, leads the discussion leading to the election date after the death of Emir Sheikh Sabah Al Ahmad Al Sabah in September of 2020.

In line with this news, the vaccines will be available to ex-pats for free and the elections. A light shines with hope on the Cabinet of Ministers announcing that the Legislation Department and Fatwa declare that everybody has the constitutional right to vote on the upcoming Elections for December 5, 2020.

Individuals who are home quarantining cannot leave their homes as it is punishable by law, but this needs to be addressed because voting is an inherent right to citizens. It is stated within the constitution that everyone should be able to vote for the nation’s betterment. The possible

election process can be achievable with the organization within the Election’s procedures and framework to inhibit the infection before the vaccines’ arrival. The methods are still unclear, but the hope is there as the issue is being discussed and analyzed.

After the elections, Kuwait decides to postpone the ban on the 34 countries until after the elections. As a precautionary measure and for reparations to be taken during the National Assembly election, the Election on Commissions compels judges, representatives, media, policemen, and frontliners to submit a PCR certificate.

Hope for OFWs and the Filipinos to Access the Vaccine

Meanwhile, when it comes to our beloved  240,000 OFWs in Kuwait, thirty-five percent of professionals, sixty-five skilled in their fields, are inside this workforce. 23,000 OFWs lost jobs from the pandemic, and some of these 23,000 OFWs have “no work, no pay” status. Five thousand of the displaced OFWs already received financial assistance under the Department of Labor and Employment’s Abot Kamay Ang Pagtulong program. Around 5,011 Filipino workers have received the one-time USD200 cash assistance under the Department of Labour and Employment’s Abot Kamay ang Pagtulong (AKAP) program. Huwaag tayong mawawalan ng pag-asa. Laging andyan si Hesus para gabayan tayo and it’s here. There’s the start to the solution. For hardworking and hopeful OFWs, there is hope to get back on track.

With this statement, President Duterte approves the Department of Health’s request for Emergency Use Authority (EUA) in hastening the process of approval of the COVID-19 vaccines’ distribution in the Philippines. The Philippine government wants to scratch up a total of Php73 Billion for the payment of 60 million Filipinos alone.

“Ang 73.2 billion na pinansyal ay mayroon at naayos na.” says Duterte in a meeting in Davao City regarding the discussion of the pandemic issues.

It takes around Php 1,200 for one vaccination of a Filipino citizen, which foresees the Php 73 billion budget to pay sixty percent of the Philippine population. According to the World Health Organization (WHO), if a herd immunity of 60-70 percent is reached,

This means that 60 million Filipino citizens are already covered, and the Philippines have funds for it.

Our hopeful OFWs are 10th in priority in the eligible groups listed to receive the vaccine given by DOH representative Dr. Aleli Annie Grace Sudiacal.  Hope is there, wag mawalan pag-asa. Let’s endure this all together. This is the start of a revolutionary change from the pandemic we were once stuck in.

To learn more about the priorities and the pandemic, you can visit the Department of Health.

My Trusted Page of References for Covid-19 Updates.

For questions, comments, and suggestions, you can send me a message at diarynigracia@gmail.com