“Believe you can and you’re halfway there.”

Today marks the 208th day of our COVID-19 Pandemic journey. Everyone is mourning with the sudden demise of Kuwait’s Amir. Aside from his death, we also mourn to loss of lives against COVID-19. COVID-19 cases in the country continue to develop as the week passes by. I want to remind everyone to adhere to health protocols so that we will not contract the virus. Let us continue to pray to our Almighty that the pandemic will soon end.

The recent developments on COVID-19 figures in the country signal an alarm because of the rise in hospital ICU occupancy and death rates. The Ministry of Health continues to regularly monitor the data so that they can formulate policies that will able to stop the virus from the spread as well as re-opening the economy. 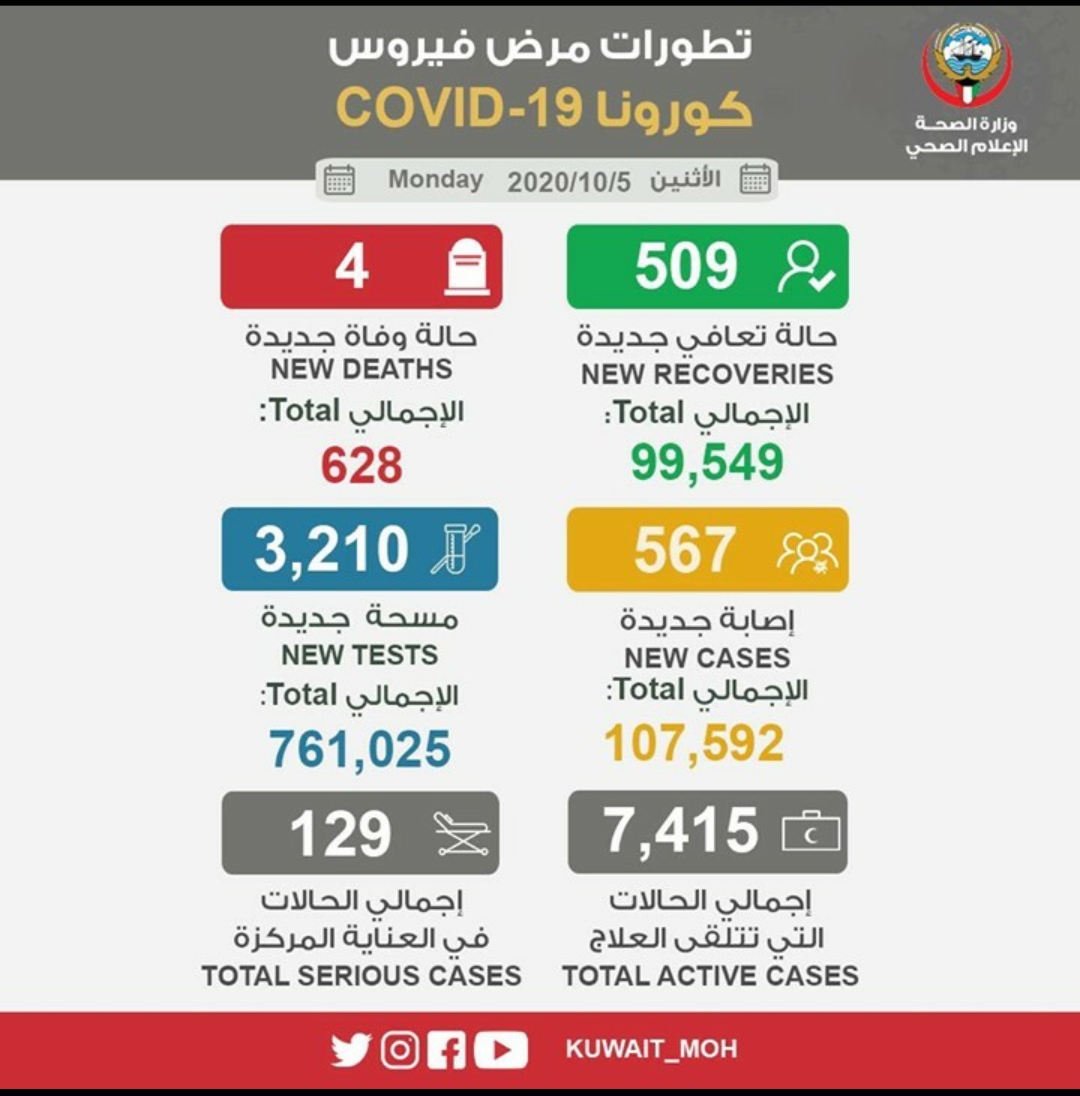 The Kuwait Ministry of Health (MoH) reported five hundred sixty-seven (567) new confirmed COVID-19 cases. This brings to the total of 107,592 confirmed COVID-19 cases in the country. The MoH also reported 4 new COVID-19 deaths bringing to a total of 628 deaths. However, The MoH positively reported that there are 509 new recoveries from COVID-19. This brings to the total of 99,549 COVID-19 recoveries. As of today’s date, there are 7,514 total active cases in the country, and still hopeful that they will recover from COVID-19. 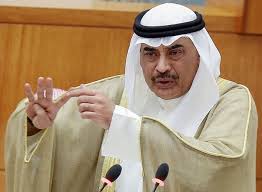 This photo was taken from: Arab News

Prime Minister Sheikh Sabah Al-Khaled Al-Hamad Al-Sabah has cautioned that recent indicators of the COVID-19′s spread in Kuwait are concerning and that the government will take the relevant health precautions to prevent the spread of the virus. 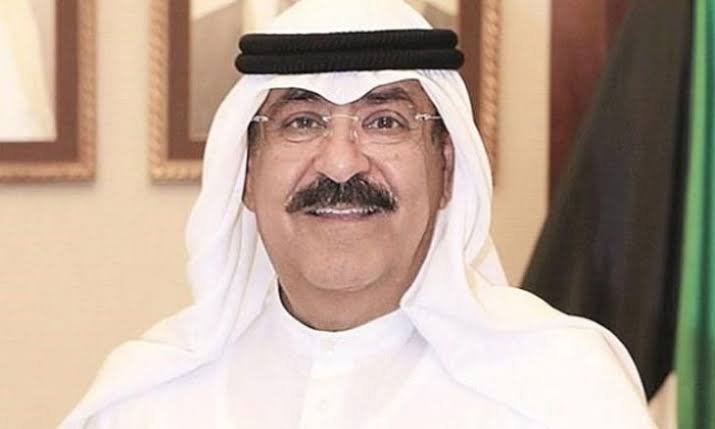 This photo was taken from: Gulf Times

His Highness Sheikh Mishal Al-Ahmed Al-Jaber Al-Sabah has been named as the new Kuwait’s Crown Prince.

The Al-Sabah family “blessed” Sheikh Mishal‘s appointment, which must be accepted by Kuwait’s parliament. Two members of Kuwait’s ruling family had earlier sworn support to Sheikh Mishal as crown prince via Twitter.

Following the death of his brother, Sheikh Sabah Al-Ahmed, last week, H.H. Sheikh Nawaf assumed power, at a time when tensions between Kuwait’s larger neighbors Saudi Arabia and Iran are high, and the government is attempting to strengthen finances weakened by cheap oil prices and the COVID-19 pandemic.

Sheikh Mishal, who was born in 1940, is the younger brother of the late Emir, who died last Tuesday. Since 2004, he has served as the National Guard’s deputy chief. He had previously held positions in the security services and Ministry of Interior.

From 1967 to 1980, the new crown prince worked in the Interior Ministry, rising through the ranks to lead the department of general investigation. Sheikh Mishal is attributed to improving the department’s function as a state security agency.

According to diplomats and analysts, Sheikh Nawaf, 83, could delegate a greater portion of responsibilities to his heir apparent, who will have to move quickly to address domestic problems, due to his low-key style and age.

“Sheikh Mishal does not have any alleged scandals and controversy associated with him. He has a very close relationship with the Emir Sheikh Nawaf Al-Ahmad Al-Sabah, and is viewed to have good relations with high neighbors such as Saudi Arabia and the U.A.E. He was also the one that accompanies the late Emir to the U.S. for medical treatment,” said Danie Thafer, director of Gulf International Forum.

“Sheikh Mishal is seen as part of the security apparatus. He did not have good relations with Islamists and with the Muslim Brotherhood,” Cianza Bianco stated, a research fellow at the European Council on Foreign Relations.

If the emir declares a crown prince on Wednesday,the country’s parliament speaker says legislators will vote on it on Thursday, the last day of parliament’s term. 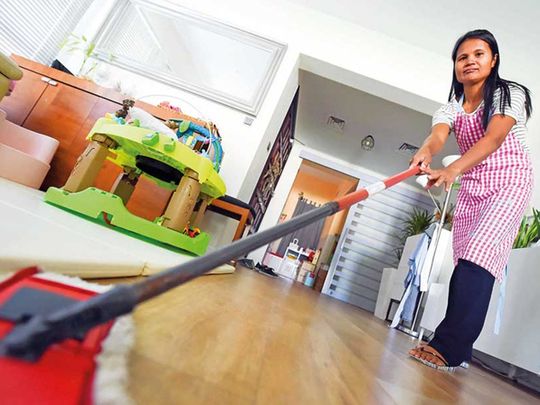 This photo was taken from: Kuwait Update

In Kuwait, five domestic workers were arrested for stealing money from their sponsor. The arrest was made after the Kuwaiti sponsor made a complaint with the police charging them of robbing 11,000 Kuwaiti Dinars from the safety deposit box.

He reported to police that the maids were well aware that he was keeping cash in the safe. Despite this, the maids denied stealing the money during their interrogation. The fingerprints were removed from the safe by forensic employees. 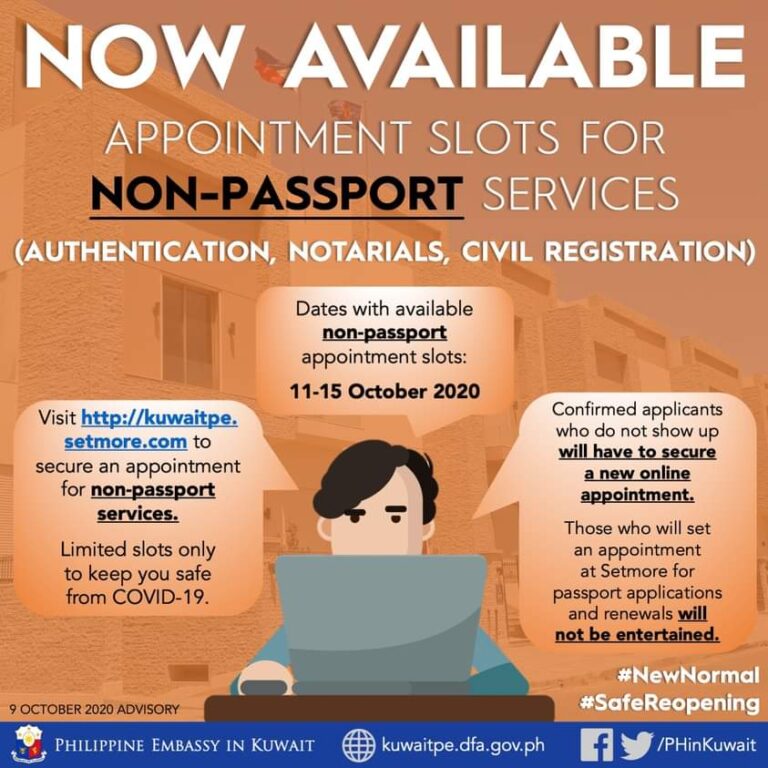 The Philippine Embassy in Kuwait wishes to inform everyone that Appointment Slots for Non-Passport Service for the date 11-15 October 2020 are now available. To those who will avail authentication, notarials, and civil registration services from the Embassy should secure an appointment via https://kuwaitpe.setmore.com. 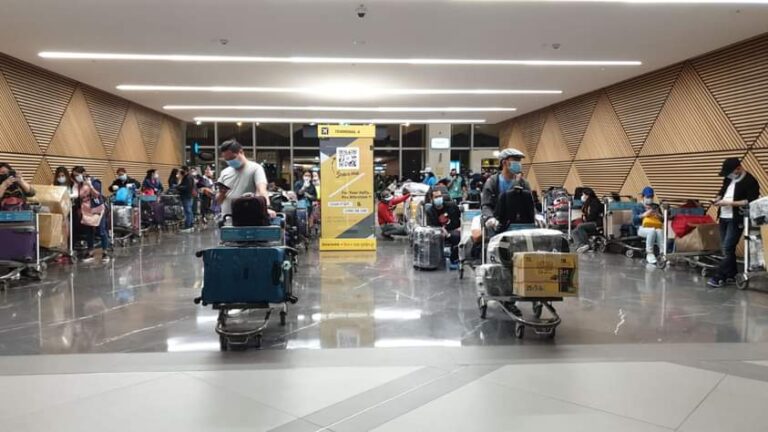 On 11 October, with more than 310 overseas Filipino onboard finally departed for Manila through the 18th chartered Kuwait Airways flight. Among the passenger include undocumented and distressed Overseas Filipino Workers assisted by the Philippine Embassy and POLO-OWWA Kuwait.

The Civil Aviation Authority of the Philippines (CAAP) granted landing clearance for the chartered Kuwait-to-Manila flight at the NAIA, upon the endorsement of the Philippine Embassy and the Department of Foreign Affairs (DFA).

The threat of COVID-19 is real and we should not be complacent about it. Each one of us should comply with the health protocols imposed by the government because this is for our safety.

CORONAVIRUS DIARIES: Week #28: The Bright Side of Dark Days

If you like this article please share and love my page DIARYNIGRACIA PAGE. Questions, suggestions, send me at [email protected]