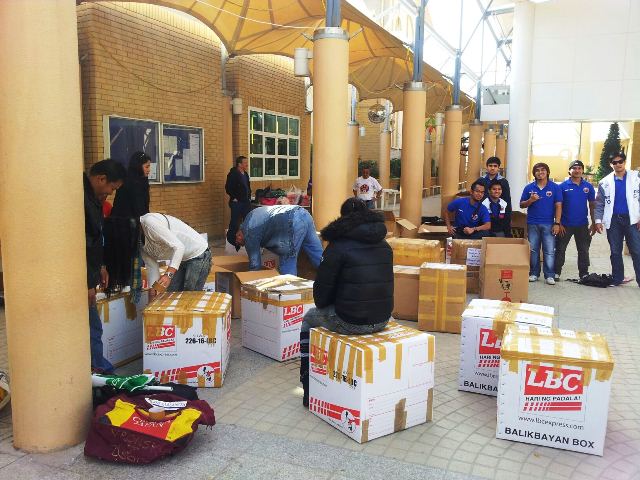 With the death toll reaching the thousand mark, hundreds missing and feared dead and the estimated damage to infrastructure and crops about more than 7 billion pesos, Typhoon Pablo (international name Bhopa) that made land fall on December 4, 2012 in Eastern Mindanao,  is believed to be one of the most devastating typhoons to hit the Philippines. The storm caused massive damages to crops, agriculture and infrastructure and displaced hundreds of citizens.

In line with this, the Filipino communities in Kuwait alongside other expatriates and individuals coordinated altogether to come up with a donation drive for the victims of the said devastation caused by the typhoon.

What: Oplan Pablo is a another donation drive from the different Filipino expatriate communities  Kuwait, composed of mostly Overseas Filipino Workers (OFWs) to help victims of Typhoon Pablo (international name Bhopa) which devastated Easter Mindanao Province in the Philippines a few weeks  before Christmas.

While we are assured that our respective families have been able to spend Christmas and New Year rather comfortably, the victims of Typhoon Pablo may have felt unexplainable pain and suffering due to the recent calamity.

The best way to alleviate the sorrow and pain of the victims is to show concern and care. That was paramount within the Filipino communities in Kuwait, hence, the donation drive got started.

Another humanitarian effort to donate and help make the lives of fellow Filipinos, badly affected by typhoon Pablo, seek comfort and balance, through the coming together of different Filipino communities in Kuwait and making the donation drive a success.

Many donated new towels, shirts and blankets for our fellow Filipinos severely affected by the typhoon. Other goods were contained in a total of 81 boxes, shipped to the Philippines through LBC Express Kuwait.

Many donated new towels, shirts and blankets for our fellow Filipinos severely affected by the typhoon. Other goods were contained in a total of 81 boxes, shipped to the Philippines through LBC WLL Kuwait, always a step ahead in providing services.

As an OFW-community leader stated,

“Being able to help gives you a sense of fulfillment. In my own personal view it provides good vibes in your daily endeavor knowing that you have shared a piece of happiness and comfort to those souls in need. Either big or small it counts! It has also been my advocacy to give in return, to others in my own small way, for all the blessings I have received.” – Hengie PANIK Pres.

“Once again, kabayans have proven that wherever Filipinos are in the world, they come together to help each other in the spirit of bayanihan.”