Announcement to the Filipino Community in Kuwait 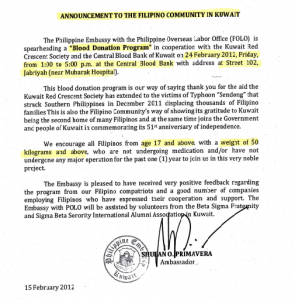 The Philippine Embassy with the Philippine Overseas Labor Office (POLO) is spearheading a “Blood Donation Program” in cooperation with the Kuwait Red Crescent Society and the Central Blood Bank of Kuwait of Kuwait on 24 February 2012, Friday, from 1:00 to 5:00 p.m. at the Central Blood Bank with address at Street 102, Jabriyah (near Mubarak Hospital).

This blood donation program is our way of saying thank you for the aid the Kuwait Red Crescent Society has extended to the victims of Typhoon “Sendong” that struck Southern Philippines in December 2011 displacing thousands of Filipino families. This is also the Filipino Community’s way of showing its gratitude to Kuwait being the second home of many Filipinos and at the same time joins the Government and people of Kuwait in commemorating its 51st anniversary of independence.

We encourage all Filipinos from age 17 and above, with a weight of 50 kilograms and above, who are not undergoing medication and/or have not undergone any major operation for the past one (1) year to join us in this very noble project. 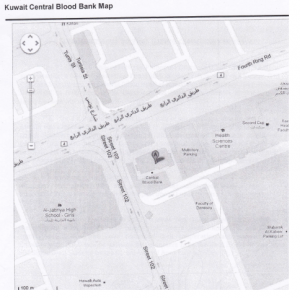 Of the seven blood groups (Kidd,Kell,Duffy,MNS,&Lewis), ABO and RhD are the most common .Belonging to ABO blood groups are Type O-known as the UNIVERSAL RECIPIENT, can receive all types of blood  types(A,B,0 & AB) Type A- compatible to A & AB, Type B- compatible to B & AB and  Type AB- compatible to AB and is also known as the UNIVERSAL DONOR….Note!!ABO- incompatibility can cause overwhelming Haemostatic activation reaction resulting to shock, renal failure and possible death. RhD incompatibility among pregnant mothers is fatal since  it can cross the placental barrier from mother to unborn child which can further cause hemolytic disease of the newborn. As a general rule, RhD negative  should never be transfused with RhD positive red cells. If unavoidable, Anti-D immunoglobulin is administered.   To avoid such, Pre – Transfusion check is done by at least two clinical staff…particularly trained  & competent nurses. Below are list of the essential things to be considered.*check for signs of leakage, clumps or abnormal colour*check patient’s name, DOB, UR, on the BT record if it is compatible to pt”s wristband*check the pack number on the BT record and pack /tag label..*check the pt’s blood type and BT record’s incompatibility* check for expiry date on the pack*check medical orders such as volume or rate per minute*finally, complete documentation such as signed patient’s informed consent, date, time of BTR  and file of BTR should always be kept confidential for patient’s right to confidentiality Any discrepancy should be reported at once to get rid of possible fatal result  and complications.

5 thoughts on “Blood Donation Program: A Way of saying Thank You from the Filipino Community in Kuwait”