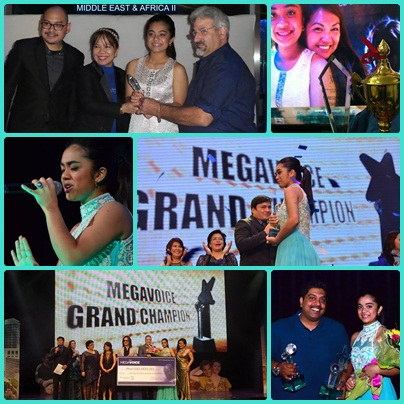 She is only 14 years old but belts out songs like a professional singer. A near perfect blend of Pakistani and Filipino genes, she lives in Kuwait where she has deepened her Faith in the Almighty, simultaneously becoming multi-racial in almost every aspect of her life. Her name is Tanya Dawood.

She is Kuwait Mega Voice winner and went on to compete in Muscat, Oman for the Regionals. Gratified with the best parents, a very good coach and tireless supporters, Tanya was honored to be the Middle East Mega Voice Champion / Regional Champion Middle East & Africa II. This is her ticket to the Mega Voice Grand Finals in the Philippines.

The Grand Finals in Manila last December 16, 2014 was hosted by actor Gabby Concepcion and Ms. Liz Guerrero. Like Tanya said, “I just owned the stage the moment I walked on”. With her unceasing Faith, confidence in herself and the spirit of bringing home to Kuwait the grandest award of the night, she became the Mega Voice Grand Champion.

Tanya spent Christmas and New Year in the Philippines with her father. She also participated in the Concert for a Cause of Makulay Performing Arts for typhoon Yolanda victims with her sister Fahreen. Last month, a victory party was held here in Kuwait to celebrate her Mega Voice Championship.

Congratulations Tanya! God bless you and your family always.